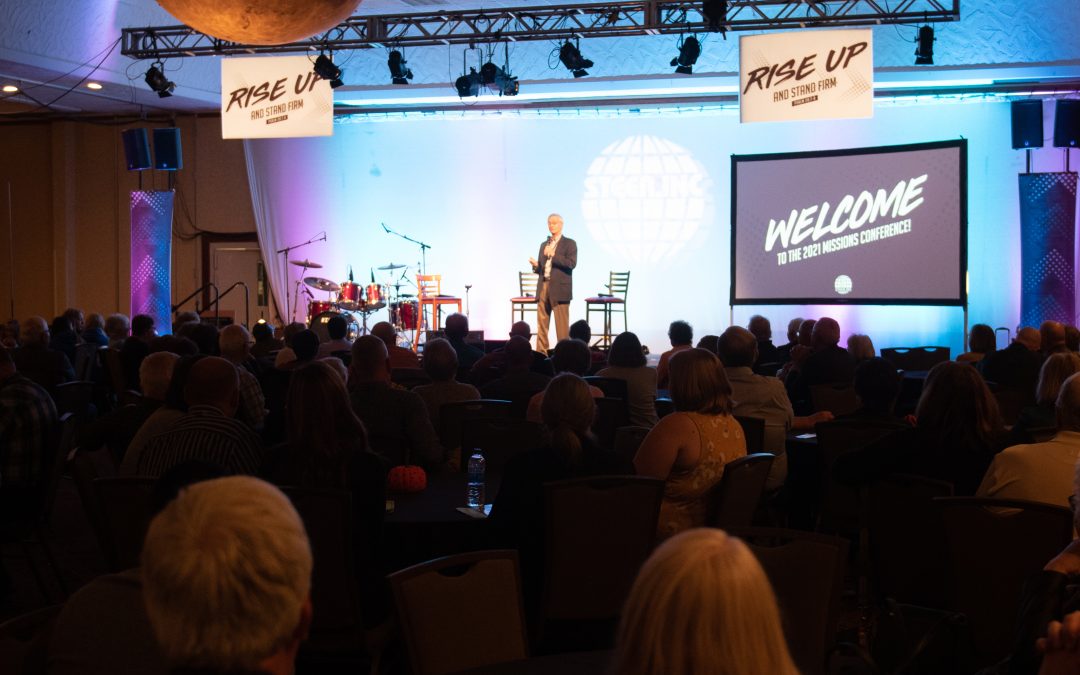 Last weekend I overheard a comment during the photo slideshow at the Steer Missions Banquet, “A third of these pictures look amazing.” To be fair, all of the pictures were great, but the point being made was the other two-thirds of the pictures look the same as they would any other year. Many venues go long periods without aesthetic refreshes, so it’s up to each event to make the space unique. For Steer, this shows what incremental improvements can do for an event. For everyone, it emphasizes the importance of your event standing out in a culture inundated by media.

When Steer first asked me to help produce the conference about ten years ago, I was a little over my head. We operated on the ‘beg, borrow, and steal’ model to make it happen. Gear was taken from youth rooms, pulled out of equipment racks, and borrowed from friends. One year we bought every VGA extension cable we could find in town to get the projectors to work. We made things work in ways they weren’t supposed to. The job got done, but at the expense of reliability, ease of use, and overall quality. Worse, when the event was over, it took hours to get all the equipment back in place and ready to use Sunday morning at church. I don’t miss leaving the church at 3 am, after putting everything back in place and testing it.

Over the years, our incremental improvements took many forms. It was adding another person to the team. Or having two projectors that match each other. Or the audio that we somehow make a little better every year. Some improvements aren’t immediately apparent, like video inputs that work reliably, regardless of source. Others are obvious, like getting lighting on the stage. There was the year I got held up in Dallas, and people stepped in to get the first part of the conference done without me. Maybe the most fun was the first year we did a set design. When you watch people taking selfies with the set, it means they are marketing for you. That’s a dream for any organization.

The Steer Conference has become one of my favorite things to do, and I look forward to it every year. I get a lot of joy helping churches and organizations take steps forward in their mission. The easy path is to accept the status quo as good enough. But God calls us to give our best. Our best does not come from the easy path, it comes from pushing past our comfort zones, doing things in a different way, reaching NEW people.

Perhaps it was suiting that Nick Hall was the keynote speaker this year. As the leader of Pulse, he guides an organization that is reaching a new generation in creative ways. They proclaim bold and ambitious visions and push after them. The money isn’t always there at the launch, but they move ahead, and the Lord provides. The comparisons to Billy Graham aren’t unwarranted.

Incremental improvements. Little by little, year by year, change what you can to take a step forward. Someday you’ll look back and realize what you are doing today is monumentally better than ten years ago.